Antimicrobial resistance is one of the biggest threats to global health that can affect anyone at any age in any country. The World Health Organization (WHO) recently warned that “Deaths caused by infections from antibiotic-resistant bacteria will skyrocket over the next two decades, along with huge economic costs, without immediate, ambitious and coordinated action.”

In the US, superbugs sicken, disable and kill many Americans every year. Until recently, it has been estimated that at least 23,000 annual deaths resulted from antibiotic resistance as well as caused 2 million infections. Surprisingly, these numbers are considered “low-ball” by just about everyone including the Centers for Disease Control and Prevention (CDC), which derived them. However, the CDC figures only include patient deaths in hospitals and do not take into account the deaths from superbug infections that occurred at home or in senior facilities. Considering this fact and not surprisingly, Reuters reported in 2016 that there actually could be tens of thousands more superbug-related deaths each year over and above the reported 23,000 or more deaths in hospitals.

The Infectious Diseases Society of America (IDSA), which represents physicians who specialize in infectious diseases, recently decided to move away from relying on the CDC estimates and instead use a figure of up to 162,044 deaths annually, which is more than 7 times higher than the CDC’s official estimation.

Looking at the big picture, the revised estimate makes multidrug-resistant infections the third leading cause of deaths in the United States today after heart disease and cancer. These revised figures reveal that more deaths are caused by antibiotic resistance than are caused by all accidents and they are more than double the number of opioid deaths.

Coincidently, the Israeli Ministry of Health recently reported that there has been a 10% increase over the past 4 years in the number of deaths resulting from antibiotic resistance infections, hence inferring that this has also become the third leading cause of death in Israel.

Worldwide, the WHO, the CDC and others consider the global epidemic of antibiotic resistance to be one of our biggest threats to global health. The latest official WHO figures estimate that 700,000 deaths each year are attributed to antimicrobial resistance. According to a groundbreaking report, the UN ad hoc Interagency Coordinating Group on Antimicrobial Resistance warned that if no action is taken, drug-resistant diseases could cause 10 million deaths each year by 2050. Consequently, this could result in damage to the economy as catastrophic as seen during the 2008-2009 global financial crisis. By 2030, antimicrobial resistance could force up to 24 million people into extreme poverty. 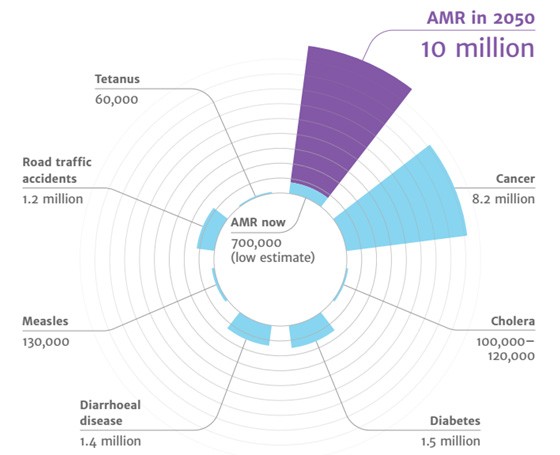