The consensus is that Antimicrobial Resistance (AMR) is caused by overuse of antibiotics that leads to the development of resistance. Bacteria have developed resistance to ALL approved and marketed antibiotics. 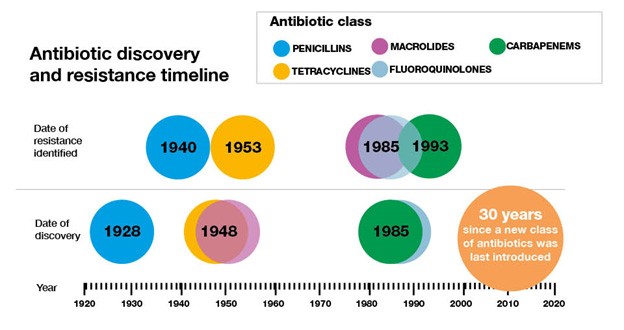 According to a 2017 WHO report, antibiotics do not address the growing problem of antimicrobial resistance. The report identifies 51 new antibiotics and biologicals in clinical development to treat priority antibiotic-resistant pathogens. Among all these candidate medicines however, only 8 are classed by WHO as innovative treatments that will add value to the current antibiotic treatment arsenal. There is a serious lack of treatment options for multidrug and extensively drug-resistant M. Tuberculosis and gram-negative pathogens including Acinetobacter and Enterobacteriaceae (such as Klebsiella and E. Coli), which can cause severe and often deadly infections that pose a particular threat in hospitals and nursing homes.

Of great worry, the WHO reported that many of the drugs currently in clinical trials are simply modifications of current antibiotic classes. Moreover, these drugs will only work as a “short-term” solution since antimicrobial resistance is expected to continue evolving.

Alarming lack of development to fight AMR by pharmaceutical companies

Surprisingly, many large pharmaceutical companies have been pulling out of R&D investments related to AMR. Last year, Novartis ended its’ antibacterial and antiviral research program while its’ researchers were working to address multidrug-resistant gram-negative bacteria. Recently, AstraZeneca, Sanofi, Allergan and others also made cuts or exits.

This “broken” antibiotic market is a real cause for concern to governments and agencies. In the last few years, agencies such as the FDA, CDC and government funded investments are driving incentives to wake up the market space and move development forward to respond to this urgent problem. There is now a consensus that resistance to antibiotics is one of the biggest global threats we currently face. The UK Chief Medical Officer, Prof. Damme Sally Davies recently warned:

“The advances of modern medicine will be lost, and the transplanting of organs abandoned if countries fail to tackle the rise in antibiotic resistance.”

The need is absolutely urgent, and the problem is rapidly growing. At this point, it is safe to say that the market is simply not standing up to the challenge, and there is an immediate need to develop innovative technologies to fight against the global problem of antibiotic-resistance bacteria.